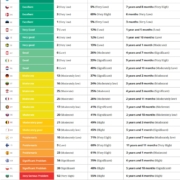 Over the past few years, governments, media and citizens have become increasingly alarmed about the backsliding of fundamental European values. This has led to a series of policy measures designed to halt and reverse the trend. In 2020, the European Commission adopted a new annual rule of law review cycle – and in a separate process, structural funds have been withheld as a result of its negative rule of law assessments.

With the rule of law becoming an issue of sanctions and hard political controversy, the situation of the rule of law in EU member states should be correctly and exhaustively understood. A missing piece in this puzzle of rule of law shortcomings is the non-implementation of judgments of two key European courts: the European Court of Human Rights and the Court of Justice of the European Union.

At the same time, the Court of Justice of the European Union (CJEU) is facing increasing contestation. Non-implementation of CJEU judgments is a recurring phenomenon with the EU Member States ignoring CJEU’s judgements since its inception. Yet, the resistance against the Luxembourg-based court has increased in recent years, with courts and governments in EU Member States openly challenging the top body of the EU’s judiciary.

The EU’s response to the rise of democratic and rule of law backsliding is at an important stage of development. This is a key time to ensure that it is as effective as possible. We hope that this report will help put the implementation of European Courts’ judgments firmly inside the EU’s rule of law agenda, to be seen as an essential requirement of all European states.

As of January 2022, there are 106 leading judgments pending implementation in Romania. This is the highest number of pending leading judgments of any country in the European Union. Just since the beginning of 2020, the ECtHR has delivered 36 new leading judgments in respect of Romania. Recent judgments include those concerning the failure of authorities to carry out an effective investigation into ill-treatment by a third party (Toma v. Romania), the failure to protect the life of a victim of a subway station accident (Nedelcu v. Romania), and unlawful psychiatric confinement as a security measure (R.D. and I.M.D. v. Romania).
The implementation of these cases needs to be effectively addressed through the taking of individual and general measures.

4 years, 2 months – Average time that leading judgments have been pending

Of the leading judgments handed down by the ECtHR against Romania over the past ten years, 57% await full implementation. Only five leading judgments have been implemented by authorities since the beginning of 2020.
While the data shows that there is significant room for improvement, there are also some positive examples of ECtHR judgment implementation where reforms have been initiated or are underway. However, significant efforts are required further to improve ECtHR compliance and its overall implementation record.